Stimuli-responsive polymer films play an important role in the development of smart antibacterial coatings. In this study, we consider complementary architectures of polyelectrolyte films including a thin chitosan layer (CH), poly (acrylic acid) (PAA) brushes and a bilayer structure of CH grafted to PAA brushes (CH/PAA) as possible candidates for targeted drug delivery platforms. Atomic force microscopy (AFM) was employed to study the structure-mechanical property relationship for these mono- and bi- layered polymer grafts at pH 7.4 and pH 4.0, corresponding to physiological and biofilm formation conditions, respectively. Herein, the surface interactions between polymer grafts and the negatively-charged silica colloid attached to an AFM lever are considered as representative interactions between the antibacterial coating and a bacteria/biofilm. The bi-layered structure of CH/PAA showed significantly reduced adhesive interactions in comparison to pure CH but slightly higher interactions in comparison to PAA films. Among PAA and CH/PAA films, upon grafting CH over the PAA brushes the normal stiffness increased by 10 fold at pH 7.4 and 20 fold at pH 4.0. Notably, the study also showed that the addition of an antibiotic drug such as multi-cationic Tobramycin (TOB) impacts the mechanical properties of the antibacterial coatings. Competition between TOB and water molecules for the PAA chains is shown to determine the structural properties of PAA and CH/PAA films loaded with TOB. At high pH (7.4), the TOB molecules, which remain multi-cationic, strongly interact with polyanionic PAA thereby reducing the film’s compressibility. On contrary at low pH (4.0), the water molecules preferentially interact with TOB in comparison to uncharged PAA chains and upon TOB release, results in a stronger film collapse together with an increase in adhesive interactions between the probe and the surface and the elastic modulus of the film. The bacterial proliferation on these platforms when compared to the measured mechanical properties shows a direct correlation and hence understanding nano-mechanical properties can provide insights into designing new antibacterial polymer coatings. This work is in press, ACS Applied Materials and Interfaces. 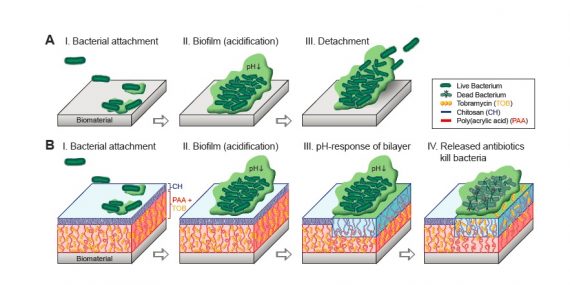 The impact of cytoskeletal organization and connectivity on non-specific NP mobility was probed by injecting NPs with 5k PEG brushes (10 nm hydrodynamic diameter) into the cytoplasm of healthy, fibroblasts, and cancerous, fibrosarcoma, cells, as well as within these cells exposed to cytoskeletal destabilizers, cytoclasin D and nocodazole. NPs injected into fibrosarcomas, which had more disorganized actin than fibroblasts, showed faster diffusion, 0.1µm2/s versus 0.04µm2/s, and an increase in the amount of space explored by the NPs. When actin was disrupted with cytoclasin D, diffusion was increased in the fibroblast cells, while diffusion was minimally impacted in fibrosarcomas. Nocodazole did not greatly impact the diffusion behavior of NPs within either cell line. By characterizing the distributions of NP displacements, an average mesh size could be characterized. The displacement distributions also indicated that NPs within fibrosarcoma cells and fibroblasts exposed to cytoclasin D moved between meshes more easily than control fibroblasts. This research demonstrated the sensitivity of intracellular QD diffusion to actin cytoskeletal modifications. The organization and extent of polymerization of the actin within each cell controls the confinement the NPs experience and their ability to diffuse.

Cell injection is one of the core methods to introduce non-permeable molecules into cells. It allows direct access to the two main intracellular compartments, the nucleus and cytoplasm. The video above shows dye (for visualization) being injected into human dermal fibroblast cells. Cell injection is used in conjunction with AFM and other biophysical imaging techniques to connect the viscoelasticity of cells to overall cell health