Polymer nanocomposites (PNCs) are multicomponent systems that integrate fillers, with a characteristic length on the nanoscale, into polymeric matrices. The ability to combine inorganic and organic building blocks has received significant attention since the resulting material will possess properties of each component. PNCs enable the design and fabrication of heterogeneous materials with enhanced properties that would not be realized with each constituent alone. However, the properties of these inorganic-organic hybrid materials depend on not only the individual characteristics of both the nanoparticles (NPs) and the matrix, but also the dispersion and organization of the NPs. Advances in both theory and experiments (work previously explored by the Composto group) describe methods to control the spatial distribution of NPs in polymers by means of tailoring ligand and matrix parameters such as chemistry and chain length. Both enthalpic and entropic interactions play a crucial role in determining the dispersion behavior of NPs. However, control over the organization of nanoscale fillers is limited to either aggregation or dispersion in homopolymer matrices. Instead, nanocomposites that exploit phase-separating diblock copolymers (BCPs) can facilitate hierarchical arrangements if favorable thermodynamic and geometric factors exist between the particle system and polymer template. This body of work investigates facile fabrication methods to precisely manipulate architectures of nanoparticles assemblies in polymers. Ultimately, the goal is to establish platforms for deliberate particle manipulation for the design of multifunctional materials for various applications. 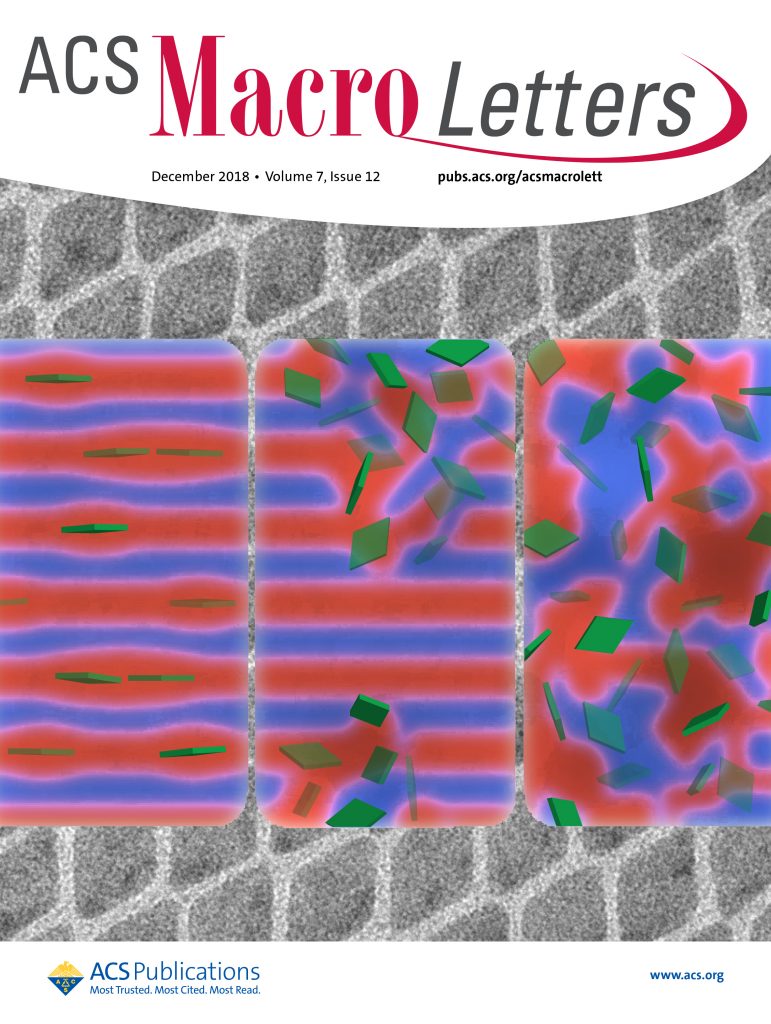 We are currently implementing self-assembling BCPs as a template to precisely manipulate architectures of nanoparticle assemblies in polymers. Using BCPs, we seek to design thin-film PNCs with enhanced properties by controlling the placement, organization, and interactions of the included NP fillers.

In addition to using BCPs as templates, our group is also working to develop hierarchical structures in polymers films using PDMS stamps as guides for defined structural arrangements.

Through nanoparticle (NP) incorporation into polymer gels, the composite’s properties and function can be improved while maintaining desired gel qualities. Additionally, characterizing NP movement within polymer gels will aid in understanding how drugs, viruses, and gene vectors move within synthetic and biological polymer networks, which could improve the efficacy of drug delivery. Single Particle Tracking (SPT) uses computer analysis of videos to follow the movements of individual probe particles or molecules. SPT allows for the motion of hundreds to thousands of individual particles to be monitored and quantified with high temporal and spatial resolution. In contrast to methods where ensemble averaged values are measured, SPT allows for enhanced analysis of heterogeneity in probe behavior and environment. In the Composto Group, we use SPT to study the mobility of NP probes within a variety of polymer systems to answer fundamental research questions while maintaining relevancy to industrial materials and biologically impactful fields.

We are currently studying NP diffusion within conventional gels that respond to the environment, such as polyacrylamide gels to solvents and poly(N-isopropyl-acrylamide) to temperature.  In these gels, the external stimuli cause volumetric changes occur in the gels. The volumetric changes often result in phase separation in the gel, dense polymer regions separated from solvent rich regions. The impact this separation and contraction has on NP diffusion is schematically shown in the figure below. In a, NPs diffuse through water swollen gels that are weakly confining. However, as the stimuli is added, regions of the gel collapse into a tighter network, preventing some NPs from diffusing and increasing the tortuosity of the pathway for other NPs, shown in b. In the fully collapsed state, NPs are highly confined by coiled polymer strands. NPs inside the most compact, dense regions do not diffuse, while those in less compact regions have reduced diffusion due to increased friction with the collapsed strands, shown in c.

While conventional gel synthesis methods result in heterogeneous mesh structures, novel methods of synthesis have resulted in more uniform mesh structures. We are currently studying these gels to understand the gelation mechanism and how homogeneity changes the relationship between confinement and diffusion of NPs.

Using polymer field theoretic simulations, we are currently probing the interactions between nanoparticles when confined within the diblock copolymer domain with the same chemistry as the surface of the particles. The results show that the interactions are determined by a complex interplay between chain entropy and enthalpy. Also using polymer field theoretic simulations, we are exploring the free energy increase seen as a result of confining a grafted nanoparticle between two surfaces as a result of varying parameters such as particle size, grafting density, and graft length. 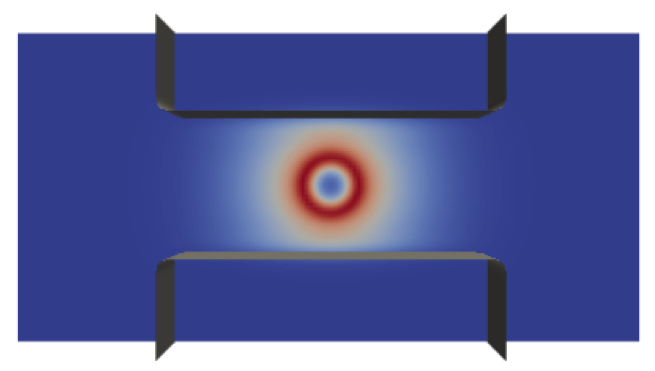